School Drop Off, the Middle Finger and Permission 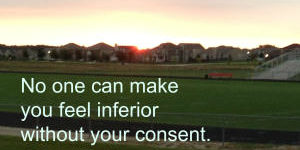 I was dropping off my youngest at his preschool.  I backed out of the parking lot, and drove through the neighboring strip mall’s lot, as a way to pull onto the road.

I was sitting there watching the cars, one lined up right after the other, speeding by…. quickly!   I did not want to risk it, I was not late and I was going to take my time and wait for a good gap before I pulled out onto the road.

I was just thinking about how my three year old started to cry as I left him at school this morning. It was odd for him… a first.  I knew he would be okay by now, I thought, as I watched the traffic whiz by. I was almost proud of myself that it was only a couple minutes and I was already trying to pull it all into perspective. He was learning that school is nothing to be afraid of, and sometimes we get upset but that he can turn it around and wipe his own tears away and move on for a successful, happy day at preschool.

I was peaceful, grateful, calm and about to start a quick prayer before I headed into work.

That is when I heard it.  A honking horn.  I looked around because I could not reason why anyone would be honking.

That is when I saw it.  The anger on her face.  The yelling, directed at me…. wait….AT ME?

That is when I realized. The woman behind me was ANGRY. She was yelling, while looking right at me, I could see in my rearview mirror.  Spirited hand gestures accompanied her yelling. It appeared that I was taking way too long to pull onto the road.

Although I felt slightly attacked (you should have seen the rage in her face). I purposefully decided I was NOT going to be bullied into making less than safe decisions while driving.  I was going to sit there…. and heck, maybe I would even be EXTRA careful now….

The yelling kept up.  Now I was getting angry!  Who was she to tell me how to drive?  Who was she to act like this simply because I did not want to pull out in front of a speeding car? What was WRONG with her? I was no longer feeling calm or peaceful…or in the mood to pray.

As I finally pulled onto the road, and she right behind me… there came a point, about 30 seconds later, where an additional lane opened. I saw this coming and contemplated if there was any gesture I may want to show her as she passed me by….

I am not a one-finger salute, kind of gal… but I would be lying if I told you I did not think about it for a slight second. Then I saw her kid in the passenger seat.

She had a child with her (if not more in the backseat).   I am not going to judge because I do not know what that woman was dealing with, however, that type of anger over something so simple can not be healthy for anyone in that family. Maybe it was a rock bottom moment for her…maybe not. I will never know.

A few minutes later, I was surprised to find that I was a tad shaken up as I walked into the coffee shop.

This saying echoed in my head as I realized…. I was giving this random, road-rage-woman power over me and my day.  This woman did not have any power over me, to make me feel anger, stress or even animosity.

I had just left my preschool child, and even though he cried that morning, I knew he was safe, and was done crying by the time I pulled out of the parking lot. I was heading to a job that I truly enjoyed.  Did I really want to let another woman’s anger void my otherwise joyful state?

Remember, no one can make you feel anything without your permission.  DO NOT give them permission.

The one lesson from my campus job that I still practice
September 29, 2022

Lesson from the Fire- Home is NOT Where Your Steak Knives Sit.
September 11, 2015